“When you start, finish.  Always finish and do not just sit on it…. put it out into the world.”

Dublin born Actor and Director Robbie Walsh is on an upwards trajectory.  His film – ‘The Letters’ is winning awards and critical acclaim worldwide having just been listed on Apple TV.  So, as we like to support indie film makers, it felt only right that we reached out to Robbie and got to know the director a little more.
Here’s what we discussed.

Hello Robbie, welcome to The Silver Hedgehog.  Let’s kick off with a quick look at Imdb.  Imdb Trivia mentions you are ex- army, is that true and what did you do in the Army?

”Hi Garry,  yes it’s true.  I spent 6 years in the Irish army. I was a buck private, While I served I got my fitness up and boxed and did track for them.  Unfortunately I injured myself in a way that meant I couldn’t compete or do duties. So I went back to the other passion of mine and started studying acting.” 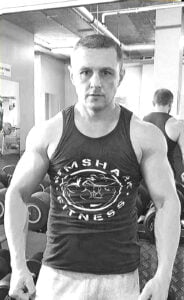 What a career to pick up after the Army. I see your acting credits lean towards the bad guy role, do you see yourself as a bad guy actor?

”I get cast or called to auditions for bad guy roles a lot. I don’t mind this as bad guy, good guy, or anti-hero, I see myself as an actor that will always look for what I can do to make each character stand apart from another.”

What has been your favourite job – Acting or Directing, so far and why?

”Acting: it must be my film ‘SPLIT’, I had my best mate (David Alexander) in the lead with me and my family producing, so I was free just to act and improvise.
Directing: it is ‘THE LETTERS’,  I was blessed to be able to capture some of the most talented actors in Ireland push themselves to tell this incredibly emotional story”

You burst into directing with the short ‘Aces’ back in 2009 and have followed up with films such as Split 2016, Eden 2016 and The Letters 2021 all of which have gained awards and positive critical acclaim on the festival circuits.

”Yes, and it’s nice to have that back catalogue of work to be able to see my progression as a film maker in real time.”

What lead you to directing and producing your own films?

”I wasn’t getting called to audition for big parts and as I have always been a student of film,  I decided to create a few short films, then progress to features.”

Your latest film, ‘The Letters’ is a poignant, if not distressing film based on the Irish Cervical Cancer Scandal. What prompted you to write it?

”I wanted to try and do my part to draw attention to the subject and to show the women in my family I spoke up.”

What makes the Letters so cutting, is your choice to focus on a set of women that reflect a cross section of society, and explore their situations and experiences through to end of life, including real commentary from the victims.  Why go down that route instead of creating a dramatized documentary similar to what ITV did with the Salisbury poisonings?

“I wanted to make the film relatable to everyone watching it, while making it feel like an existential nightmare, that you as the voyeur are inadvertently a part of”

The scandal is such a personal moment for many, other than your own story ideas how much input did the victims and survivors have in the story?

”When I wrote ‘The Letters’, I made sure that I spoke at length with some of the survivors, victims & campaigners.  I put some of this research and sentiment direct in the film, but to deepen the impact on screen I included artistic liberties at times, and included metaphors to make people think.”

It’s clear you love film and cinema, when I watched The Letters, I noticed some scenes seemed to pay homage to other film makers.  Could you tell us the film makers you reference in your shots?

”As a student of film I’m inspired by loads of technical filmmakers.  For the letters it’s definitely Felinni, Scorsese, Wheatly, Booreman, Lee, Lean, Goddard, Kazan and Von Trier to name a few.”

I bet you faced a massive challenge to get the film made, what advice would you give other film makers in similar situations?

”When you start, finish.  Always finish and do not just sit on it….  put it out into the world.”

What films do you like to watch yourself? and is there a particular film that has had a lasting impact on you ?

”I’ll watch as many films as I can, a few that have had a lasting impact include King Kong (original), Streetcar Named Desire, Cool Hand Luke, Aliens, Predator, Heat,  8-1/2, Pulp Fiction, Cinema Paradiso, Escape to Victory and Bullitt.”

Lastly If you could have drink with any historical figure, who would you choose? and what would you talk about?

”My grandfather, I’d sit with him, my Dad & my younger brothers and ask him his opinion on my films, and ask him to educate me some more on film over a pint.”

Massive thanks to Robbie for taking time out to answer our questions.

If you are in the USA, Robbie Walsh’s THE LETTERS screens in NEW YORK on 26th January, at the Origin Theatre Festival.
For tickets: http://origintheatre.org

If you need someone to talk to, we listen. We won't judge or tell you what to do.

This site is a non-profit project..

As a small, independent website run by Garry in his spare time,  we need your help to continue providing great content.

Please donate to help The Silver Hedgehog grow. All funds are put back into the website, and help provide new features.

Buy Me a Coffee is a service that allows you to make a voluntary one-off donation in the form of a cup of coffee.

We have several Patreon subscription levels available, starting at £3.00 per month.

This site is a non-profit project..

As a small, independent website run by Garry in his spare time,  we need your help to continue providing great content.

Please donate to help The Silver Hedgehog grow. All funds are put back into the website, and help provide new features.

Buy Me A Coffee

Buy Me a Coffee is a service that allows you to make a voluntary one-off donation in the form of a cup of coffee.

We have several Patreon subscription levels available, starting at £3.00 per month.

An office worker by day and blogger by night. Garry is the creator and writer of The Silver Hedgehog.  A Sci-Fi geek (don’t mention Terry Pratchett or Isaac Asimov unless you have a spare hour) and avid film fan (noted for watching Titanic 8 times at the cinema 🤩).  Enjoys writing reviews and blogs in his spare time, and is waiting for the day he gets paid for it!

Vampire Energy and The Phantom Load.
2 May 2022

Epilepsy Safe Mode
Dampens color and removes blinks
This mode enables people with epilepsy to use the website safely by eliminating the risk of seizures that result from flashing or blinking animations and risky color combinations.
Visually Impaired Mode
Improves website's visuals
This mode adjusts the website for the convenience of users with visual impairments such as Degrading Eyesight, Tunnel Vision, Cataract, Glaucoma, and others.
Cognitive Disability Mode
Helps to focus on specific content
This mode provides different assistive options to help users with cognitive impairments such as Dyslexia, Autism, CVA, and others, to focus on the essential elements of the website more easily.
ADHD Friendly Mode
Reduces distractions and improve focus
This mode helps users with ADHD and Neurodevelopmental disorders to read, browse, and focus on the main website elements more easily while significantly reducing distractions.
Blindness Mode
Allows using the site with your screen-reader
This mode configures the website to be compatible with screen-readers such as JAWS, NVDA, VoiceOver, and TalkBack. A screen-reader is software for blind users that is installed on a computer and smartphone, and websites must be compatible with it.

We firmly believe that the internet should be available and accessible to anyone, and are committed to providing a website that is accessible to the widest possible audience, regardless of circumstance and ability.To fulfill this, we aim to adhere as strictly as possible to the World Wide Web Consortium’s (W3C) Web Content Accessibility Guidelines 2.1 (WCAG 2.1) at the AA level. These guidelines explain how to make web content accessible to people with a wide array of disabilities. Complying with those guidelines helps us ensure that the website is accessible to all people: blind people, people with motor impairments, visual impairment, cognitive disabilities, and more.This website utilizes various technologies that are meant to make it as accessible as possible at all times. We utilize an accessibility interface that allows persons with specific disabilities to adjust the website’s UI (user interface) and design it to their personal needs.Additionally, the website utilizes an AI-based application that runs in the background and optimizes its accessibility level constantly. This application remediates the website’s HTML, adapts Its functionality and behavior for screen-readers used by the blind users, and for keyboard functions used by individuals with motor impairments.If you’ve found a malfunction or have ideas for improvement, we’ll be happy to hear from you. You can reach out to the website’s operators by using the following email [email protected]

Our website implements the ARIA attributes (Accessible Rich Internet Applications) technique, alongside various different behavioral changes, to ensure blind users visiting with screen-readers are able to read, comprehend, and enjoy the website’s functions. As soon as a user with a screen-reader enters your site, they immediately receive a prompt to enter the Screen-Reader Profile so they can browse and operate your site effectively. Here’s how our website covers some of the most important screen-reader requirements, alongside console screenshots of code examples:

We aim to support the widest array of browsers and assistive technologies as possible, so our users can choose the best fitting tools for them, with as few limitations as possible. Therefore, we have worked very hard to be able to support all major systems that comprise over 95% of the user market share including Google Chrome, Mozilla Firefox, Apple Safari, Opera and Microsoft Edge, JAWS and NVDA (screen readers), both for Windows and for MAC users.

Despite our very best efforts to allow anybody to adjust the website to their needs, there may still be pages or sections that are not fully accessible, are in the process of becoming accessible, or are lacking an adequate technological solution to make them accessible. Still, we are continually improving our accessibility, adding, updating and improving its options and features, and developing and adopting new technologies. All this is meant to reach the optimal level of accessibility, following technological advancements. For any assistance, please reach out to [email protected]